Composers within the Festival

As part of the project Orgelfrühling Steiermark 2020.2021.transformations, we present selected artists in this format.

The young composer Stefan Johannes Hanke has recently been awarded the prestigious Hindemith Prize of the Schleswig-Holstein Music Festival. For the first time, commissioned by our festival, he deals as a composer decidedly with the instrument organ, as he reveals in an interview for Orgelfrühling Steiermark.

The current portrait gives an insight into the work of SJ Hanke and presents a selection of his current works.

Stefan Johannes Hanke answers questions from the festival Orgelfrühling Steiermark in an interview.

Recently, the work "ATTRACTED BY SHINY OBJECTS" by SJ Hanke was premiered by saxophone students of the Würzburg Hochschule für Musik Würzburg, together with their professor Lutz Koppetsch.

The piece was commissioned by the Music University to increase the number of original works for large saxophone ensemble.
Each of the movements presents one of the featured saxophones in a soloistic manner.

The students are from a variety of programs from PreCollege to Bachelor and Master Studies up to the postgraduate Meisterklasse. 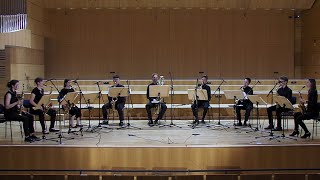 Hindemith Award Ceremony at the SHMF 2021

In their program neue musik NDR Kultur broadcasts a concert recording from this year's Schleswig-Holstein Music Festival, in which for the first time two Hindemith Prizes - for 2020 and 2021 - were awarded.

SJ Hanke should have received this prize in 2020 - the award ceremony had to be postponed to this year due to COVID-19.

In addition to music by this year's prize winner Mithatcan Öcal and the awardee from 2019, two works by SJ Hanke were premiered at the concert:

Both pieces, the piano trio "STARFISH REBELLION" and "COMING UP FOR AIR" for clarinet quintet are temporally close to each other, yet separated by the formative months of the lockdown. Whereas in STARFISH REBELLION, written to mark the birth of his first daughter, Hanke puts over-excited, playful and euphoric chaos into sound, the clarinet quintet is of uncompromising clarity, stripped of all ornamentation and unsparing in its emotionality.

In addition to numerous works for orchestra and chamber music ensembles, one of his focal points belongs to the stage. After two chamber operas and two children's operas, which are staged regularly at various theatres, including the Semperoper Dresden, the Staatstheater Darmstadt, the Theater Basel and the Oper Köln, his ballet "grotesque & arabesque" was commissioned by the Staatsoper Hannover in 2018/19, based on motifs by Edgar Allan Poe (choreography by Jörg Mannes).

In 2020 SJ Hanke has been awarded the Hindemith Prize of the Schleswig-Holstein Music Festival. The postponed award ceremony took place in August 2021.